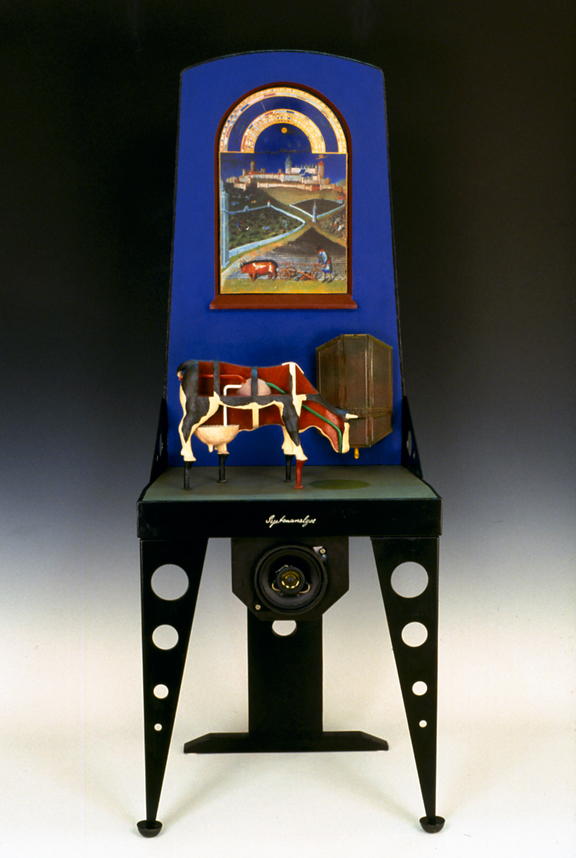 Duke de Berrcy’s book of hours, where what must be done in the course of the year is set down on record, is not the origin of agricultural science yet it continues to serve as an instruction manual for yield increase.

We thank the well-intentioned agricultural scientists for their efforts in creating nourishment for more and more people.

providing for both work and relaxation and production and harvest. The cows practiced friendship with the earth they tread upon and with the grass they were privileged to consume, much as if it had been written somewhere.

That’s how it is.

Cows give meat give milk and skin and hair and bone and joy.
That can be.

Lovely back when naturally occurring odors made the nose wrinkle.
Palaces with new menaces, the danger of which human noses electronically subjugated, secured, surveilled, assembled and shipped out can no longer scent.
That should be so.

And heaven looks as gray as the face of its gray mirroring waters. Forests disappear from history books to keep children from asking what they were. And the beasts save themselves if they can by clever mutations.
That could be.

Don’t fret about how just get through the cow so flows the discharge of research in the color of milk and tastes as if it would otherwise no longer be palatable.
That must be so.
Foreign aid for the kings of industry is granted by the new saints. They sit at the production levers of smart hopes. No clinking of gold in the pouches at their belts, merely gold stockmarket numbers on the monitors lately sprouted from their palms.
That would like to be so.

That may not otherwise.

How full of blessing the night that takes all under its wings equally.

That can do no other.

The fanfare in the courts of the newly landed gentry penetrates the farmyards and gives no warning. The odors of the farmyards climb fleet-footed over the walled-in compound.

That would be nice.